As you can see below from my previous post, this year's vote went almost exactly as I had hoped! I plan to make the journey to Cooperstown in New York for the Hawk's induction ceremony. I'm now hoping that the Cubs will retire #8 later this summer.

I expected that Bert Blyleven would join him, but he came up painfully short--a mere 5 votes. He will certainly get in next year, along with Robbie Alomar. I was somewhat surprised to see Barry Larkin only garner a little more than 50% of the votes, but that number bodes well for his chances in the future. Edgar Martinez's vote totals show that a significant percentage of Hall voters are amenable to a full-time DH joining the ranks of baseball's elite. It was also encouraging to see Tim Raines' numbers increase this year--he is very underated and warrants induction.

Next year's ballot will include these worthy players, along with some interesting first-time candidates, including Jeff Bagwell, John Franco, Juan Gonzalez, Larry Walker, and Rafael Palmeiro. I think only Bagwell stands a reasonable chance of making it on the first ballot, but Palmeiro's vote total will be quite interesting.
Posted by Jeremy Roe at 12:06 PM 38 comments: 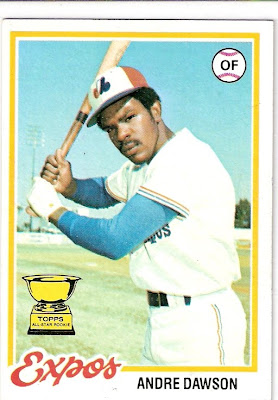 On January 6, the Hall of Fame class of 2010 will be announced. Given the name of this blog, you know that this topic is most interesting to me. First-timers on the ballot include Roberto Alomar, Barry Larkin, Fred McGriff, and Edgar Martinez, among others. Holdovers include Andre Dawson, Bert Blyleven, Tim Raines, Mark McGwire, Alan Trammell, and Lee Smith, among others.
Up front, I must disclaim that I am a long-time suffering Cubs fan. However, this has no bearing on the first person on my ballot: Andre Dawson. 438 homers, 314 steals, eight Gold Gloves, a Rookie of Year award, an MVP award, and stellar defense are all you need to know about Dawson to place him in the Hall. His intangibles, though, are what makes him one of my most favorite ballplayers--he was a pillar in the clubhouse, and a mentor to young players such as Shawon Dunston and Mark Grace. The fact that he has been shunned from Cooperstown for this amount of time is mind-boggling to me. Here's hoping that 2010 is THE YEAR for Andre.
There are also three additional carry-over candidates that I feel are worthy of enshrinement. Bert Blyleven gained little notoriety during his year. As I have noted here before, had he played for Boston, Chicago, or New York, he would certainly be in the Hall already. His 287 wins, 60 career shutouts, and 3701 career strikeouts make him Hall-worthy in my mind. Another contemporary of Blyleven's, Jack Morris, similarly deserves enshrinement for his stellar career statistics and playoff performances. I will continue to campaign for Alan Trammell as well, despite what I perceive as little chance that he will ever get in, unless the Veteran's Committee is reorganized in the next 20 years. Trammell was overshadowed by Cal Ripken at the time, but Trammell's 6 All Star game appearances, 4 Gold Gloves, and 3 Silver Sluggers demonstrates that he was in Ripken's class.
Although they would not receive my vote, I feel that two specialists of sorts on the ballot warrant discussion. Lee Smith was the all-time saves leader for a time, but has seen little increase in voter support since Bruce Sutter and Goose Gossage were enshrined. I do not believe Smith will make the Hall, because while he accumulated an impressive number of saves, he was a traditional one-inning stopper and never had the opportunity to build a solid body of postseason work like Mariano Rivera. Harold Baines may be one of the two best designated hitters of all time (see below for the other), but I cannot yet bring myself to find that a full-time DH is Hall worthy.
From the first year candidates, there are two infielders deserving. Roberto Alomar stands the better chance of being elected in his first year, but I anticipate that it may take an additional year or two before he gains 75% of the vote, based on his off-the-field issues and the infamous spitting incident. But his statistics cannot be ignored--he is clearly Hall material. I consider him one of the three best 2B of my lifetime, along with Craig Biggio and Ryne Sandberg. Barry Larkin was an MVP caliber player and the clear leader of the Reds in the late 80s and 90s. While his career statistics may seem short, one must remember that he was almost annually an NL All Star and that injuries cut short his career. Edgar Martinez does not get my vote for the same reasons as Baines. Fred McGriff is just short of Hall worthy in my mind, similar to Dale Murphy and Don Mattingly in my mind.
I will post my reactions to the January 6th announcement in the days that follow. Here's to a Happy 2010.
Posted by Jeremy Roe at 9:00 AM 1 comment: 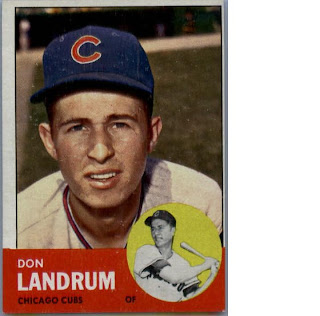 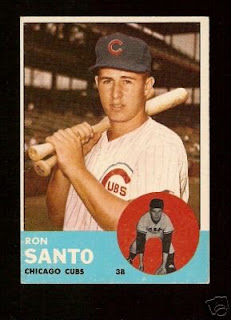 My lovely wife and I had the chance to visit my favorite card shop yesterday. I told her to select some packs from the $.50 pile. For $4, we ended up with about 100 cards. Today, kids are lucky to get a pack of 8 cards for that price, hoping for that hit autograph or relic card. Call me old school, but I would rather pay $.50 a pack and get a couple Darrin Fletchers or Scott Bankheads!

Without further ado, here are some of the highlights. I never collected the Topps Big set when I was younger, so I struck a little gold with some of my favorites, particularly Alan Trammell. 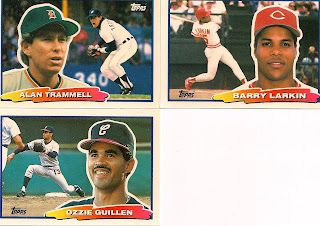 The next packs ended up as duplicates for me...I had neglected to remember that I had already collected the monster 990 card 1991 Score set back in the day. But still, it's good to see a Hall of Famer and future Hall member in my pack.

Those dream team cards from the 91 Score set are terrific, aren't they?

And finally, two additional packs netted two Hall of Famers--Henderson from the 1995 Fleer set and Ryan from the 1991 Ultra set. 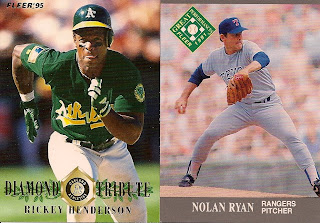 Sometimes the best part of collecting is ripping some old wax to see what bargains you might find!
Posted by Jeremy Roe at 8:32 AM 1 comment:

What Gives, Topps? Angst from a Sandberg collector.

I've previously gone on record with my lack of enthusiasm for Topps' pervasive use of variation cards throughout its regular 2009 set. Now, the trend continues with the Topps Updates and Highlights set. Like a good Sandberg fan, I diligently picked up the variation card in the regular season set--it is always a treat to pick up a Sandberg card in the sharp 2009 design.
So Topps, in what is definitely a novel idea, inserts "traded" versions of the same subjects (with some exceptions) in its Update set. And to my surprise, Sandberg is featured again, but this time in a Phillies uni! 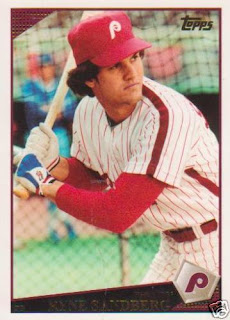 Certain readers of this blog know that there are only a few Phillies Sandberg cards in the market, so I was looking forward to picking this one up. But wait, that image looks familiar, doesn't it? You bet it does, courtesy of the 2007 eTopps Cards That Never Were collection. 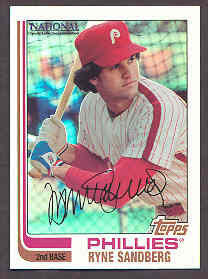 Come on, Topps. I like the idea, but not the execution. For player collectors, we would like to see what should be a relatively rare card seem truly rare, not an afterthought. Still, an addition to the Sandberg collection, nonetheless. 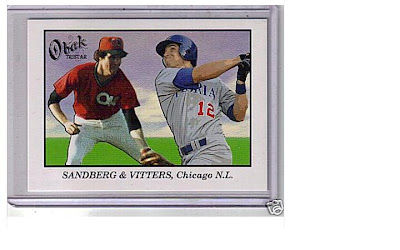 As promised, here is the other half of the Tristar Obak Sandberg additions. Hopefully Vitters will become even half of the player that Ryno was.

I'll admit that I've never been a fan of the Tristar cards before. I consider them pre-rookie cards, since the players are not featured in MLB uniforms or with the parent MLB clubs. But the new/retro Obak set is an exception because of the terrific players featured, most notably Ryne Sandberg in an OKC 89'ers uni. 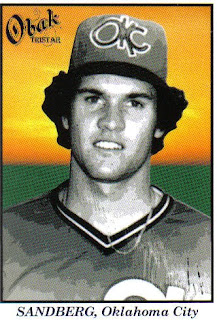 However, this is not Sandberg's first card in an 89ers uniform. Those serious collectors probably know of his rare 1981 TCMA card. That one still eludes my collection, so I will enjoy this OKC addition to my collection.

P.S. This is not the only Sandberg card in the Obak set. He is featured with Josh Vitters on an SP card that will be displayed on this blog once it arrives in the mail!
Posted by Jeremy Roe at 12:58 PM 2 comments: