Both Topps and Upper Deck have included a popular throwback-style insert product in their Series 1 sets. This year Topps has used its Turkey Red product as an insert set rather than a standalone product. While this decision has sparked various opinions, Turkey Red works well as an insert. There are two Cubs cards in this set, belonging to Kosuke Fukudome (#TR-40) and Geovany Soto (#TR-42). 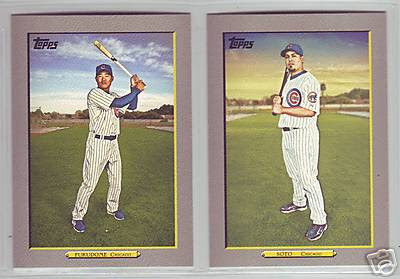 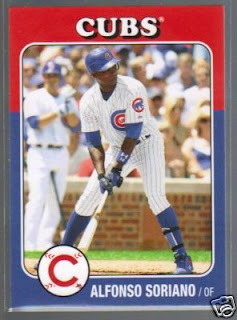 Many bloggers have posted about the similarity between this OPC throw-back design and the 1975 Topps design. While the cards are similar, there are several differences, including the background color scheme, the font for the Cubs team name, and the placement of a logo rather than the player's position in the inset circle: 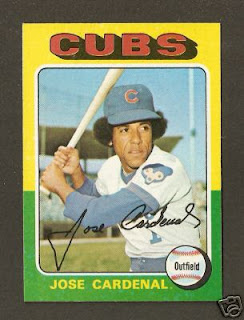 Posted by Jeremy Roe at 8:14 PM No comments: 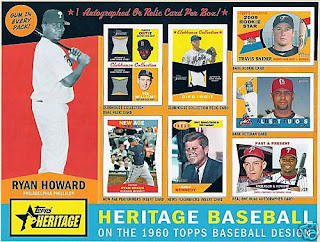 One of my favorite Topps sets is 1978, the year I was born. The look is classic Topps, and the set was quite large at 726 cards. The set is littered with Hall of Famers, 31 base cards if my math is correct. The most noteworthy cards are the Topps debuts of two Hall of Famers and one pitcher that should be in the Hall. Finally, I'll share my favorite card in the set, which is not one of the aforementioned cards.

Eddie Murray was one of the biggest sluggers of the 1980s and is one of a handful of player to accomplish both 500 home runs and 3000 hits. One of the most professional hitters in the game, his 1978 rookie card, #36, is a classic. 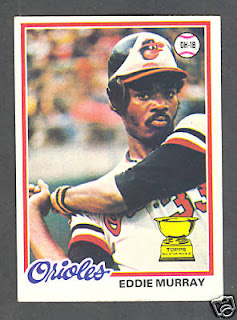 The other Hall of Fame debut in the set is Paul Molitor. Molitor had over 3300 hits, which ranks him ninth all-time. His career was somewhat overlooked because he played the majority of it in Milwaukee, and he garned nationwide recognition following his 1993 season with the Blue Jays (.332 BA, 22 HR, 111 RBI, 2nd in MVP voting). Molitor's rookie, #707, is shared with fellow shortstops Alan Trammell, Mickey Klutts, and U.L. Washington. 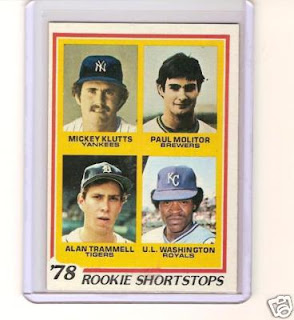 Jack Morris makes his Topps debut on card #703. Morris has come up short in Hall of Fame voting thus far, but I feel his Hall of Fame case is solid. His career stats are good, but he is best known, and understandably so, for pitching in probably the best game of the past 30 years--game 7 of the 1991 World Series. Morris pitched 10 scoreless innings against the Braves, clinching the Series for the Twins. 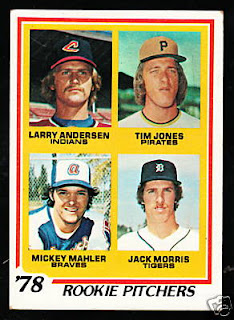 Finally, I promised to share my favorite card. Although he is not yet in the Hall, Andre Dawson's 1978 card, #72, was his first solo card after his 1977 debut on a card with three other outfielders. Appropriately, Dawson was a member of Topps' All-Star Rookie team. Dawson's Hall of Fame candidacy is undeniable, and I cannot wait to go to Cooperstown for his induction speech. 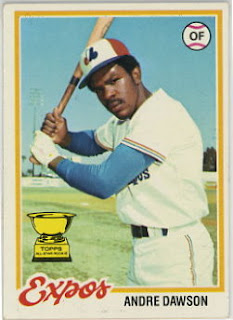 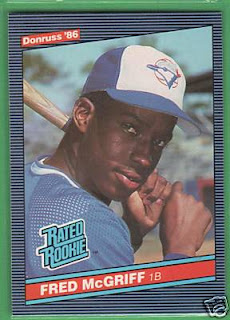 Up first in our review of 2010 first-time Hall eligibles is the Crime Dog, Fred McGriff. He was never necessarily the best first baseman in the league (one could argue that Frank Thomas and Jeff Bagwell were the dominant players at the position in the 90s), but he finished his career just shy of 500 homers. In this era, 500 homers is not an automatic lock anyway, so let's consider some additional stats.

McGriff was a five-time All Star, a three-time Silver Slugger winner, and he had over 1,500 RBI. McGriff also performed at his best when he was traded from the Padres to the Braves (for Melvin Nieves among others, no less) in the midst of the 1993 pennant race. McGriff was instrumental to the Braves' playoff run, hitting 19 home runs in just 68 games. But as a Cubs fan, my lasting memory of the Crime Dog is his resistance to accept a trade from the Devil Rays to the Cubs during the 2001 season. At the time it seemed he didn't want to leave the luxury of Tampa for a pennant race in Chicago. While he played well for the Cubs, his indecision left a bad taste for many fans.

In this fan's opinion, McGriff falls into that category of good but not great players. I do not believe he will make the Hall, but his career is certainly worth admiration.
Posted by Jeremy Roe at 10:02 PM 1 comment:

For many 30-something year-old collectors, the 1989 Upper Deck set was a huge leap forward in card collecting. While this collector favors Topps sets, there is no denying that the quality of the 1989 Upper Deck was well ahead of its Topps, Donruss, Fleer, and Bowman counterparts. The most prized card of this set is of course Ken Griffey's rookie card. 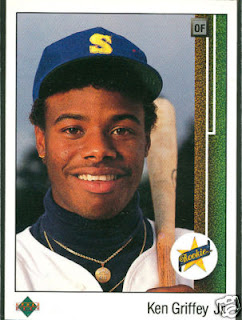 As Mr. Griffey is (hopefully) on the verge of signing a contract to rejoin the Mariners to end his illustrious career, his impact on the game cannot be understated. For many a fan today, Griffey represents what baseball should be--a truly talented player who did not need PEDs or steroids to compete. It is unfortunate that his historical legacy will be somewhat minimized based on the presence of controversial players such as Bonds, Clemens, and A-Rod, among others. But for fans who have lost some respect for the game, Griffey stands out as a truly terrific ballplayer and a role model for the next generation of collectors.
Posted by Jeremy Roe at 9:43 AM No comments: 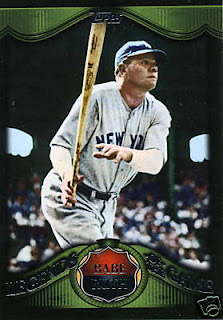 One of the more interesting insert sets in Topps 2009 Series 1 is the 25-card Legends of the Game.  The set contains a broad range of Hall of Fame players, from Cy Young to Cal Ripken Jr.  The cards have a very traditional look, and there appear to be relic versions of each.
It remains to be seen how popular these inserts will be, when many of these 25 players are also the subject of an SP variation card within the Topps Series 1 Set.  As described on bjd610's Topps Blog here, there are 19 SPs in Topps Series 1.  Seventeen of the 19 (not including Barack Obama and the Yankees CC Sabathia variation) are also featured in this set.
Thus, the substantial overlap between the two could detract collectors from this set, in favor of the more rare SPs.  But this set appears to be a more economical set for Hall of Fame collectors.
Posted by Jeremy Roe at 8:36 PM No comments: