Unlike my Sandberg collection, which is relatively complete, I have only recently started collecting Ron Santo cards. My goal is to have a complete "Topps Anthology" of all of his original Topps cards from 1961-1975. I put a good dent in my collection with a trip to my local card shop on Saturday, where I came away with four Topps cards, as well as a recent card. 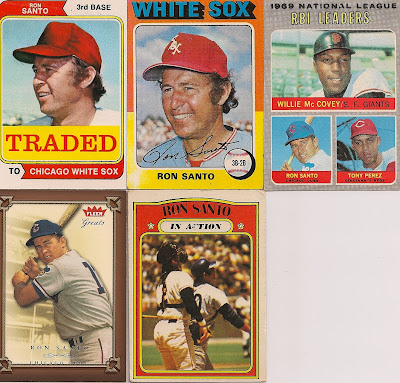 The Topps additions include his final two cards (1974 Traded and 1975), both in a White Sox uniform (albeit one airbrushed). The two other cards are from 1970 and 1972, plus a nice looking Fleer Greats. By my calculations, I have twenty more cards to go. I do have Santo's rookie card (which was an awesome birthday gift from my wife last year), so the investment shouldn't be too significant.

Happy Collecting.
Posted by Jeremy Roe at 8:10 AM