This is the second team-specific analysis I have done of potential Hall of Fame players in the game today (the first team was the Phillies).  Up next is another National League team with a plethora of Cooperstown capable players--the New York Mets.  There are six current Mets players (not including the disabled Billy Wagner) who are on track to make the Hall.  Some are more certain than others, but each one deserves recognition.
Up first is the most obvious candidate, Johan Santana.  Since his trade from the Twins, Santana has picked up right where he left off by continuing his exploits in the NL.  The winner of two Cy Young awards by the age of 30, Santana has racked up 118 wins and, along with Roy Halladay, may have the best chance of reaching 300 wins for his career among active pitchers.  While he needs another five or six first tier seasons to punch his ticket, Santana is on a one-way trip to Cooperstown.  One of Santana's best known rookie cards is from the 2001 Topps Finest set. 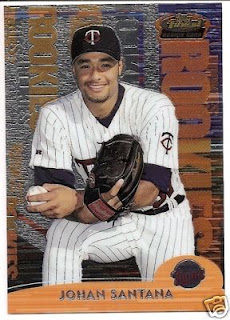 The other Mets pitcher that warrants consideration is Francisco Rodriguez.  K-Rod is only 27, and he has already accumulated 228 saves.  Last year he set the single season record with 62 saves.  This year he has posted a 1.23 ERA to date, and he has solidified a problematic Mets bullpen.  Another ten seasons of 40 saves each, and K-Rod will obliterate the career saves record (likely to be held by Mariano Rivera by that time).  While K-Rod's rookie cards have not been popular with collectors (much like other relievers), his first Topps card is from the 2000 Traded set. 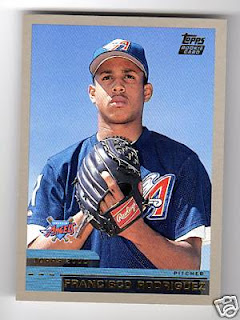 Now, let's head around the infield.  The most obvious candidate is third baseman David Wright, who has a tremendous all-around game.  In five full seasons, he has already been an All Star four times (including this season's likely election), and he is currently batting .345.  At the age of 26, he has already accumulated more than 900 hits.  He is certainly on track for a 3000 hit career.  Wright's best known rookie card is his 2001 Upper Deck Prospect Premieres. 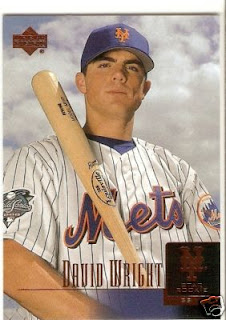 At shortstop, the Hall of Fame candidacy of Jose Reyes should garner some debate.  Reyes splashed onto the scene in 2003 and led all NL players in steals for three consecutive seasons (2005-2007).  Surprisingly, he has shown solid power in recent years, hitting 16 homers last season.  But like his shortstop counterpart Jimmy Rollins, Reyes has been hit with the injury bug.  While he is still only 26 years old, his future is a bit more unknown than his teammate Wright.  Reyes' rookie card is the 2001 Topps Traded. 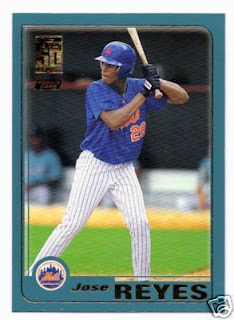 With tongue-in-cheek apologies to Luis Castillo, the final member of the regular Mets infield also warrants conversation.  Carlos Delgado has been injured for much of this season, but his career numbers cannot be ignored.  Delgado's strongest stat is his 473 career homers, but with today's diluted power numbers, his likely target of 500 home runs is not an automatic admission.  He has just over 2000 hits and 1500 RBIs, with a career average of .280.  Perhaps the most telling number is that Delgado has only been a two-time All Star, despite his prodigious power.  With a game similar to Jim Thome's, but with less power, it is unlikely that Delgado will fly into Cooperstown.  Delgado's key rookie card is the from the fabled 1992 Bowman set. While it's hard to remember him as a Blue Jay, it is even harder to remember him as a catcher. 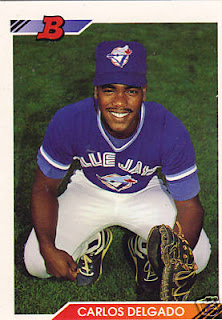 Finally, the Mets also boast an outfielder who is on the Hall of Fame track.  Carlos Beltran burst onto the national scene when he was traded from Kansas City to Houston during the 2004 season.  Beltran has never been a high-average hitter (career BA is .283), but he has hit .336 this year in an injury shortened campaign, much like several of his Mets teammates.  Beltran is a four-time All Star, a former Rookie of the Year, and three-time Gold Glove winner.  If he rebounds from injury to post another solid year, he is probably only five years away from cementing his spot in the Hall.  Beltran's Topps rookie card is the subject of much debate, as the card was actually an error card by Topps in its 1995 Traded set.  Thus I have included both his "real" rookie card (featuring an image of Juan Lebron), and Lebron's card which features Mr. Beltran. 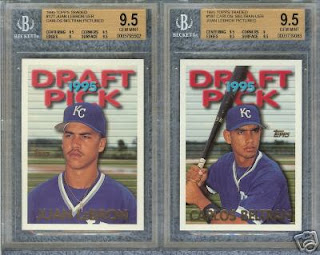 Of the six, I think the most likely Met to make the Hall of Fame is Johan Santana.  But of the under-30 subset, I think David Wright is on track to follow Santana.  Not surprisingly, those two player's rookie cards are in the most demand.
Posted by Jeremy Roe at 9:18 PM