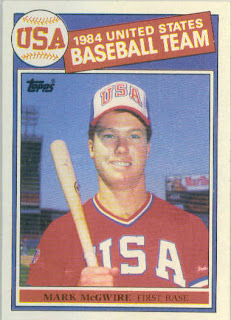 Number 6 in our top 10 countdown of the most valuable cards of the 1980s is one of the most controversial figures of the steroid era, Mark McGwire. He set the short-lived single season home run record with 70 in 1998 and along with Sammy Sosa sparked a comeback for baseball after the 1994 strike. Big Mac hit 583 home runs and was a 12-time All Star. His connections to andro and his Congressional testimony are well known, and his shortcomings in Hall of Fame votes are well known. Based on numbers alone, he certainly warrants consideration for the Hall, but his lifetime average of .263 is quite low. While he was a one-dimensional player, he was undoubtedly the finest hitting first baseman during the four-year stretch of 1996-1999.

Some of McGwire's earliest exploits are quite impressive. He debuted as a third baseman in late 1986 with some limited success. But in his first full season of 1987, he hit 49 homers, 118 RBI with a .289 batting average. The Bash Brothers of the late 1980s were exciting to watch, albeit those memories are now stained.

While McGwire debuted in late 1986, he was not featured in any 1986 traded sets. He was featured in each of the 1987 sets, but his first card was in the 1985 Topps set. I personally love the U.S.A. Olympic cards that have been featured in Topps sets over the years, including 1985 Topps, 1988 Topps Traded, 1991 Topps Traded, and 1992 Topps Traded. Sadly with no baseball in the 2012 Olympics, there will be a cycle without Olympic cards. But in recent years the Olympic cards have been offered exclusively in Upper Deck sets.
Posted by Jeremy Roe at 10:43 AM