Up next in the HOF tracker poll is the new first baseman for the Yankees, Mark Teixeira. Only 28, Teixeira has already hit over 200 home runs and won two Gold Gloves. Playing for the Yankees will give him much more visibility than he had as a Ranger, Brave, and Angel, so it will be interesting to see how he handles the pressure. He played the best baseball of his career after he was traded to the Angels in 2008, batting .358 in 54 games. He profiles as a Carlos Delgado/Jim Thome type hitter for his career, but with better defense. Barring injury, his HOF case should be solid.

Of the many rookie cards for Teixeira, my favorite is his 2001 Fleer Tradition. 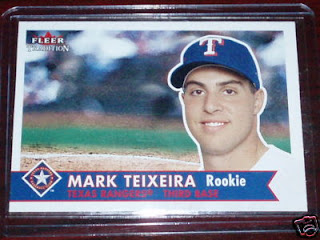