Last up in the American League hitter group of potential HOF players is Matt Holliday. A recent transplant to the AL, it will be interesting to see how much of an effect the move out of Denver will have on Holliday. After only five seasons, Holliday is a three-time All Star and Silver Slugger winner, with a lifetime .319 batting average.

His first Topps card was a shared card in the 1999 regular series. He also appeared on a popular Bowman Chrome issue the same year. 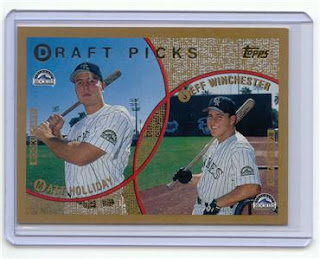 NOTE: If any readers have suggestions on potential candidates for the remaining polls (AL pitchers, NL pitchers, NL hitters), please feel free to leave a comment. Again, the criteria are that the player must have played at least five seasons (including partial seasons), and the players should not be an obvious slam-dunk candidate for the Hall (such as Pujols, Ichiro, Jeter, etc.).
Posted by Jeremy Roe at 9:24 PM