There is no denying Miguel Cabrera's offensive prowess. He is only 25, and he has already accumulated 175 home runs and more than 1000 hits. A four-time All-Star, Cabrera's biggest obstacles are of his own making; namely, his weight is a subject of concern for many Tigers' fans. In his first season with Detroit, he was finally switched off of third base, where his defense was suspect. As a first baseman, he may be limited in future All Star game appearances, with Teixeira and Youkilis likely to garner more popular support.

But Cabrera is an outstanding hitter, and with his young age and experience, he is uniquely positioned to be on track for a Hall of Fame career. Below is Cabrera's rookie card, a 2000 Topps Traded Chrome: 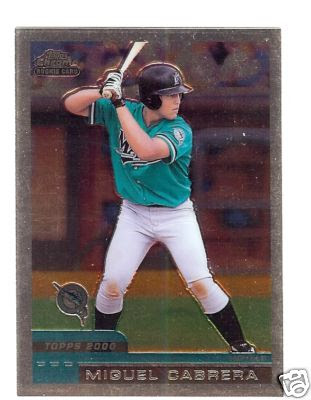