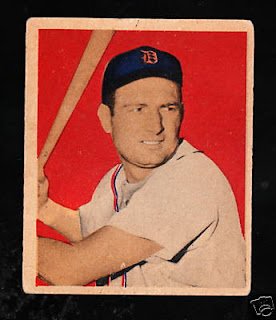 George Kell passed away earlier this week, at the age of 86. He is arguably one of the ten greatest third basemen of all time, playing in 10 All Star games with a career batting average of .306. Kell was a most unusual third baseman, in that he only hit 78 career homers at a power position.
He was revered as a Tigers legend, although he also played for the Philadelphia A's, the Boston Red Sox, Chicago White Sox, and Baltimore Orioles. After his retirement he had a successful broadcasting career, most recently with the Tigers. He was known for hanging around Tiger Stadium (and later Comerica Park) to sign autographs for fans.
Kell was inducted into the Hall in 1983. While he debuted in 1943, his first baseball card was a 1949 Bowman, #26.
Posted by Jeremy Roe at 9:38 AM