In my continuing quest to collect the complete Topps set from each of the past thirty years, I recently acquired a few sets off the Bay. The newest of these sets is the 1993 Topps set. The Series 1 and 2 factory set was huge, with 825 cards plus 10 Topps Gold and 3 Topps Black Gold cards. Of course one of the three Black Gold cards I received was a C/D winner card, but that has long since expired. The regular set contains scores of current and future HOF cards, but it is best known for containing the first regular issue Topps card of Derek Jeter: 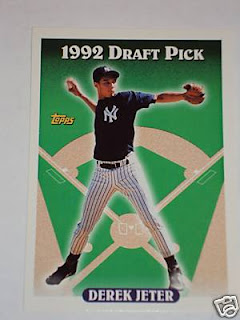 Of the many Jeter rookie cards, this one often gets overlooked in favor of some of the more premium sets he was featured in. This collector prefers the Stadium Club Murphy card as his coolest rookie, but this one is great because it is from the regular set. The set also contained rookie cards from notable players including Jim Edmonds, Preston Wilson, and an unofficial rookie card of future catchers including Mike Piazza and Carlos Delgado. The set was also the first to contain those lovely teal hats that the Marlins featured in their early years.

Although I have not committed to purchasing each full Traded set, I did grab the 1993 Traded set. This set contained traded cards of Barry Bonds, Greg Maddux, Paul Molitor, Wade Boggs, and Andre Dawson. It also featured Olympians from 1992, most notably rookie cards of Todd Helton and, to a much lesser extent, Todd Walker. 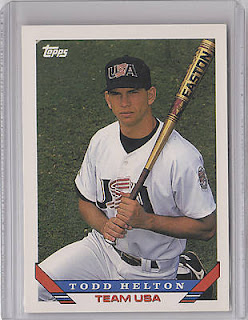 Todd Helton probably warrants a separate post to consider his borderline Hall of Fame caliber career. It will be interesting to see if he can overcome the Colorado thin air stereotype to become the Rockie's first Hall of Fame player (assuming Larry Walker is not elected).
Posted by Jeremy Roe at 1:50 PM