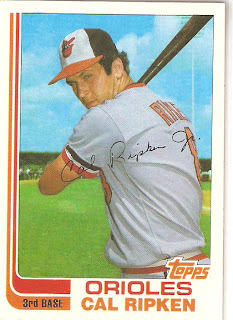 While the rookie cards of stars such as Rickey Henderson, Ken Griffey Jr., Roger Clemens, and Mark McGwire were among the ten most valuable of the 1980s, there is one card that stands above the rest in value. I’m also pleased to report that this player epitomizes all that is right with the game of baseball, unlike some of the other PED-influenced stars that have been featured in this list to date. Without further delay, the number one card of the 1980s belongs to none other than Mr. Oriole, Cal Ripken Jr.

This “rookie” card is a bit of an oddity, in that Ripken’s true RC was actually in the regular issue of 1982 Topps. While Ripken shared this card with two teammates (Bob Bonner and Jeff Schneider), he was deemed worthy of his own individual card in the 1982 traded set. Card number 98T remains a Holy Grail of sorts to collectors today, and it should remain that way long into the future.

I hope you have enjoyed the top ten series of posts. I’m considering replicating the same concept for other decades if there is interest. If you have any suggestions, please let me know.
Posted by Jeremy Roe at 5:02 PM