Unlike yesterday's review of the 1984 set which outside of the Mattingly card was fairly lackluster, the 1983 set was absolutely full of key cards, most notably the Topps rookie cards of three future Hall of Famers:  Wade Boggs, Tony Gwynn, and Ryne Sandberg.
This blog has revered the career of Ryne Sandberg before.  But those of Boggs and Gwynn also deserve appreciation.  Tony Gwynn was undoubtedly the best hitter in the NL during the 1980s, and in the 1990s perhaps only Barry Bonds would merit an argument. Gwynn also wins respect points for spending his entire career with the Padres.

Perhaps Wade Boggs' most lasting legacy was his ill-fated agreement to go into the HOF as a Tampa Bay Devil Ray when he signed with them toward the end of his career.  Thankfully the HOF took that decision away from the player, and instead made that determination in a more objective manner.  While Boggs had a terrific beginning of his career with Boston, my lasting memory is of Boggs riding a police horse around Yankee Stadium after a mid-90s World Series Championship. 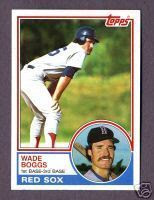