I've nearly completed my quest to own all Cubs cards from the basic Topps sets since 1978. But recently there was a deal on the Bay too good to pass up--8 Cubs subsets for essentially $2 plus shipping. Here are some highlights:

Fleer: I picked up the two early sets, 1981 and 1982. While neither has a noteworthy design (or players), it was good to see the plethora of powder blue pinstriped jerseys in the 1982 set. While the 1982 set may be better known for the Lee Smith rookie card, I particularly like the Jody Davis rookie. From the 1981 set, the most fascinating card is that of current Cubs coach Ivan De Jesus. He looks exactly the same now, almost thirty years later. 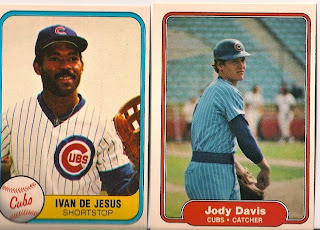 Other Fleer sets that I picked up include the 1989 and 1991 Cubs sets. The '89 set is pretty bland with a gray pinstripes background. It did include a Maddux card that I didn't have before. I feel that the '91 set is underrated. I really like the yellow design on the front, and this card is classic Dawson (even with those short lived road jerseys with the small Chicago font). 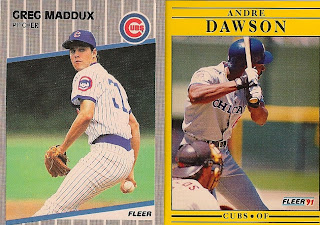 Donruss: while I am not a huge fan of Donruss cards in general, I did pick up the Cubs cards from the 1989 and 1990 sets. Neither design is particularly inspiring, and the backs of both years' cards are nearly identical. But many of my favorite players are featuring in these sets, including of course Grace and Sandberg. 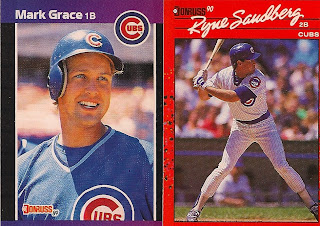 Stadium Club: Finally, the 1991 Stadium Club set was one of my all-time favorites. These cards blew the competition away in 1991 with their glossy stock and full color photos. Stadium Club and Fleer Ultra should receive a ton of credit for the evolution of card quality and design in the 1990s. My favorite feature of the 91 Stadium Club cards is that the card backs feature a picture of the Topps rookie card of the player. For example, Shawon Dunston's card features his 1985 Topps card. Of marginal note, the only player whose rookie card was the actual 1991 Stadium Club card was Gary Scott (and I think we know how that turned out). 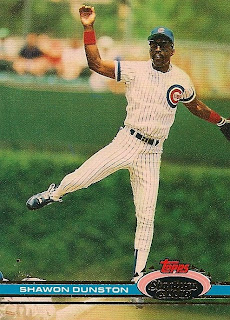 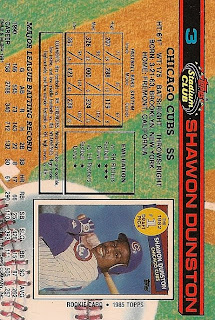