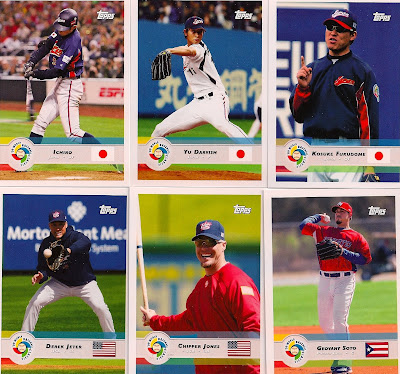 I picked up the 55-card insert set (not to be confused with the Topps Series 2 WBC set) featuring players from the recently completed WBC. The cards were obviously selected prior to the actual WBC, as noted by the card featuring A-Rod. For Hall of Fame collectors, there are cards featuring Derek Jeter, Ichiro, David Wright, Miguel Cabrera, Pedro Martinez, Chipper Jones, and Carlos Beltran. There are also several cards of potential HOF players including Adrian Gonzalez, Ryan Braun, Evan Longoria, Hanley Ramirez, Justin Morneau, Joey Votto, and Dustin Pedroia. For Cubs collectors, there are cards featuring Kosuke Fukudome and Geovany Soto. There are also several prospects featured, most notably Yu Darvish.

The set looks good, although some of the same images are used in the Series 2 inserts (such as the Darvish cards), thus negating to some extent the desire to collect both sets. The good part of the Series 2 insert set is that those 25 players actually played in the WBC, thus ensuring a satisfying insert set. But I have no complaints about this set. It's rare that you'll find an insert set featuring this many stars at such a reasonable price.
Posted by Jeremy Roe at 7:51 PM