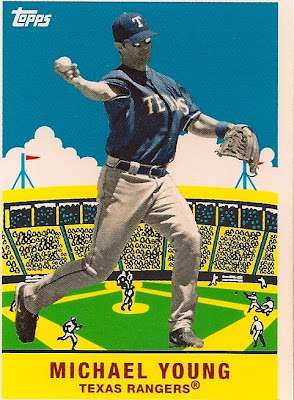 I recently picked up the 25-card Flashback Fridays set from 2007 Topps. For all of $0.50, I was able to get an interesting looking set with many future Hall of Famers such as Ken Griffey, Chipper Jones, and Derek Jeter. The sets feature a retro look, with the featured player depicted in black and white (for the most part) in front of a colorful stadium depiction. The backs of the cards feature a Goudey-style paragraph about the player, rather than a statistical grid.

One question for the readers--does anyone know if this set was modeled after a particular past set, or was this an original Topps retro creation?
Posted by Jeremy Roe at 5:55 PM