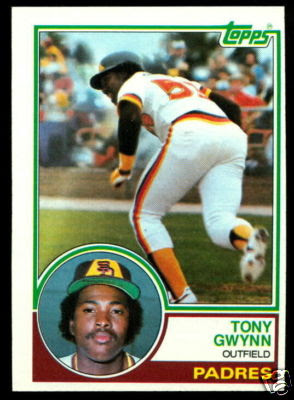 Today, being Father's Day, is a great time to reflect on the most famous "Padre" of the team's relatively short existence, Tony Gwynn.  I had a real appreciation for Gwynn as a youngster, because he did the right things by staying with his original team his entire career, and he was a hitter, not merely a slugger.  In these times, players like Gwynn and Wade Boggs should be respected for the way they played the game.
Gwynn was a 15-time All Star, 7-time Silver Slugger winner, and somewhat surprisingly a 5-time Gold Glove winner.  He led the NL in hitting eight times, and I am saddened by memories of the 1994 season, when he hit .394 and us fans were left to wonder what could have been.  There was no other player of the era who was more deserving of hitting .400, although today I am certainly rooting for Joe Mauer to beat that mark.
His 1983 rookie cards are relatively inexpensive compared to his contemporaries of the era.  But the 1983 Topps set marked the debut of three world class hitters, with Sandberg and Boggs joining Gwynn in this desirable set.
Posted by Jeremy Roe at 12:08 PM