It is well documented that some players live in the spotlight, and their Hall of Fame resume seems predestined even while they are playing in their prime (see Jeter, Derek; Pujols, Albert). Then there are others who played in relative obscurity, showing loyalty to their team and fans, and having the longevity to warrant inclusion in Cooperstown. Robin Yount falls into this latter category of baseball superstars.

Yount played all 20 seasons of his career in Milwaukee. Of his many feats, one of his most impressive was his successful conversion from SS to CF midway through his career. Yount won two MVP awards, most notably in 1982 when he led the Brewers to their only World Series appearance. While he was not a classic power hitter, he did hit 251 homers in his brilliant career, while accummulating more than 3100 hits. As can be said of many a small market player, Yount's profile would have been huge had he played in New York or Chicago. As it was, he was an outstanding player, most definitely deserving of the honors he received.

Additionally, he was one of four future Hall of Fame players to make their Topps debut in the 1975 set. As a result, the '75 set is often considered one of the most important Topps sets of all time. Yount's card is the second most valuable from the set, behind only George Brett. Here is card #223. 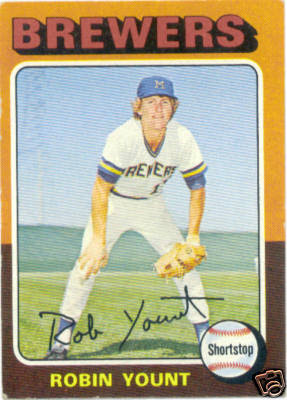