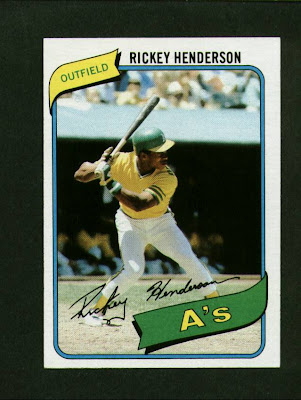 The number 3 card in our top ten most valuable cards of the 1980s countdown is a 1980 Topps entry. While the set design was nothing special, Topps was lucky enough that a young speedster named Rickey Henderson made his debut in 1979 with the A's. Henderson went on to re-write the record book for a number of statistical categories. Most notably, he set the single-season steals record with 130 in 1982, and the career steals record with an astounding 1406. Henderson is also the all-time leader in runs scored and lead-off home runs.

The 1980 rookie card is truly an iconic card. 1980 marked the final year of Topps's monopoly, so collecting Henderson's rookie card is relatively easy. The card has a book value of approximately $60 today, and Henderson's recent Hall of Fame induction should ensure this card continues to maintain its value.
Posted by Jeremy Roe at 1:50 PM