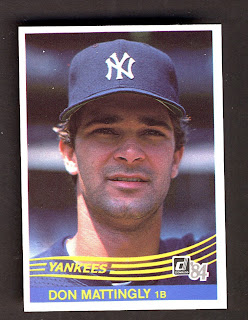 Number 7 in our Top 10 countdown of the most valuable cards from the 1980s is a former Yankee favorite, Don Mattingly. I was a fan of Mattingly's growing up, as Donny Baseball is also a Hoosier native. From a Hall of Fame perspective, it is unlikely that Mattingly will ever make it into Cooperstown. But he had a tremendous 4 year stretch of being one of the very best players in the American League. During his 1985 MVP season, Don hit 35 HRs, 145 RBIs, with a .324 average.

Don's 1984 Donruss RC has always been considered one of the most valuable cards of the decade. The Donruss card usually rates a bit more valuable than Don's Topps and Fleer rookie cards.
Posted by Jeremy Roe at 11:32 AM