As time has gone on, I have come to realize that 2001 was a truly special year for Topps. It marked Topps' 50th anniversary, and Topps spared no expense in making great cards. 2001 featured several great subsets (Through the Years, Who Would Have Thought, Before Topps), as well as the new series Topps Archives and the premiere issue of Topps Heritage. Let's start with the biggest star of 2001--the Traded set.

By some minor miracle, I secured a complete set of 2001 Topps Chrome Traded from the Bay for less than $80. The regular traded set continues to sell for well north of $100, and Chrome cards are usually graded a bit higher. But that is not why this is my new favorite set. First, this set contains some of the most important rookie cards of this decade. Everyone knows about the Pujols rookie card, as well as the Ichiro/Pujols rookie of the year card. But what makes Chrome special is that card T266 is an Ichiro rookie card, which was not printed in the regular Topps Traded set. While Ichiro appeared in the Series 2 Topps set for non-Chrome cards, he did not appear in the Chrome set. Thus, my question for the readers is the following: should I get these cards graded? While there is a cost involved with the grading process, these cards are key additions to my collection. I'm leaning towards grading them. If you have a recommendation, let me know! 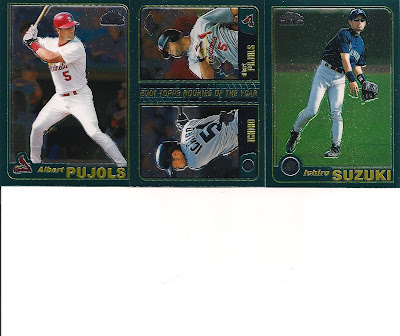 (Note that the Chrome cards do not scan very well, as each one is completely clean and Near Mint.)

But these aren't the only cards worth noting. In addition to the rookies mentioned above, the set includes rookie cards of key stars including Jimmy Rollins, Jose Reyes, Jake Peavy, and Justin Morneau. 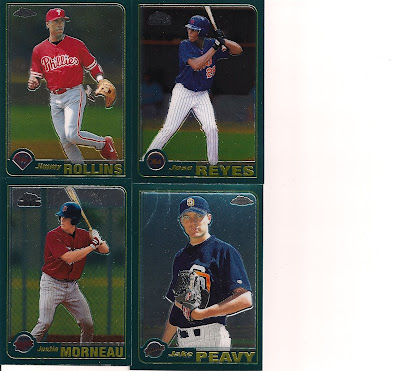 But my favorite part of this set is the Traded reprint subset that consists of cards T100 to T144. As part of Topps' 50th anniversary blitz (and what a blitz it was), Topps reprinted some of the most important Topps Traded cards from the 1970s-90s. I am a huge fan of Topps reprints, and these cards are probably my favorites (they are quite similar to Topps Reserve Archives). Here is a small sampling of this subset. 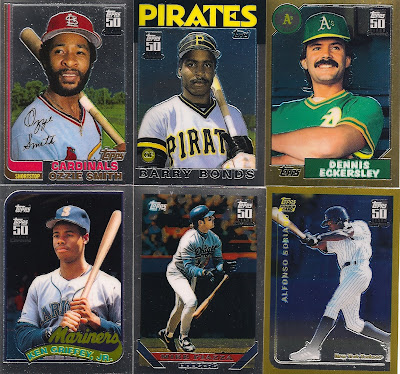 Finally, readers of HOF Cards know that I'm a Cubs collector. Well, the Cubs cards in this set are nothing special, as they feature some journeyman veterans (Tom Gordon, Jeff Fassero, Todd Hundley, Bill Mueller) and the usual assortment of Cubs prospects that never pan out (Steve Smyth, Corey Patterson, Luis Montanez, Hee Seop Choi). Of course the one saving grace from a Cubs perspective is Mark Grace's Diamondbacks card from his bittersweet 2001 championship season. There is also a Shawon Dunston card from his Giants days.
Posted by Jeremy Roe at 7:54 PM