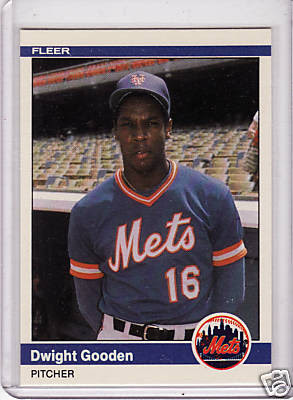 Our subject at #10 is one of only two players of the top ten of the 1980s who did not progress to have a Hall of Fame caliber career. Dwight Gooden, however, certainly began his career like a Hall of Fame player. After winning the rookie of the year in 1984 at the age of 19, Gooden won the Cy Young in 1985 with a sparkling 24-4 record and an otherworldly 1.53 ERA. "Doc" continued his success into the 90s, but problems with drugs derailed what could have been.

Late in his career, he threw a no-hitter for the Yankees in 1996. While his career is a bit short of Hall of Fame standards, he was one of the memorable players of the 1980s. After making his debut in 1984 he was featured in two update sets, Fleer Update and Topps Traded. Of the two, the Fleer card is the more valuable of the two. Those of you familiar with this set know that there is more to come from this set for this Top 10 list. The 1984 Topps Traded card has a Beckett value of approximately $10, while the Fleer card (#43) is double that.
Posted by Jeremy Roe at 10:42 AM