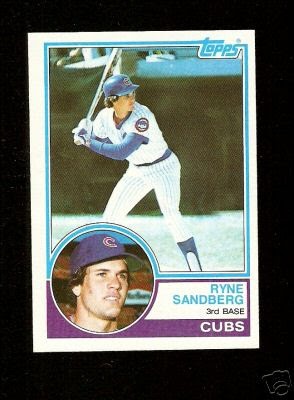 On this Cooperstown Sunday, there is no better time to reflect on the career of my favorite player, Ryne Sandberg. I was lucky enough to personally attend his Hall of Fame induction ceremony, and I hope to return to Cooperstown in the coming years for the inductions of Andre Dawson, Greg Maddux, and Ron Santo.

Sandberg's most valuable 1983 rookie card was the 1983 Topps. He was also featured in a 1982 Red Lobster set that most would consider an oddball card. His minor league cards from 1980 and 1981 are hard-to-find treasures that still elude my collection. But for me, the 1983 Topps card is a classic representation of a classic player. Sandberg was of course also featured in the 1983 Donruss and Fleer sets.

Finally, in 2005 Topps had an insert set titled Rookie of the Week. Card number 24 of 25 in that set was a reproduction of Sandberg's 1983 rookie card, but with a different image. I like the idea (it is much like the Fan Favorites sets), but I still prefer the original. Topps did reproduce the original version in its 2001 Topps Archives set.
Posted by Jeremy Roe at 9:22 AM